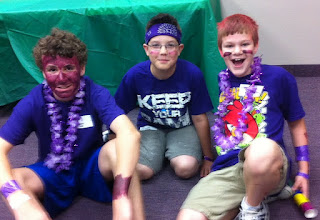 This was Matthew's 3rd year having diabetes at Vacation Bible School.  The progress I've seen in him over the past few years is nothing short of amazing.

Matthew is such a smart kid.  Fabulous grades, avid reader, and---perhaps best of all---he's a rule follower.   Very important when you have diabetes!

BUT, before you jump to the conclusion that I have the perfect child, you need to know that Matthew is much more interested in robots than diabetes.

He would rather play Minecraft than count carbs.  The child would rather do anything besides think about diabetes!

Which is why it's such a blessing to see him taking over more of his diabetes management.

VBS and Diabetes Three Years Ago


I would hunt Matthew down at snack time.  Whenever I asked how many carbs he thought it was, he would say "10" every single time.  He wasn't thinking about the carbs at all, "10" was just the magic number for him.  I would help him get a more accurate count, give him a shot and leave.

Fast Forward to VBS This Year


We would start each morning with a visit the church kitchen.  Once we found out what the snack would be, we'd discuss it, make a plan, and he was on his own for the rest of the morning.  He had his phone and could call me if he needed to, but he never did.

He was amazing.  Even the day his group got a different snack than what was planned!

He rolled with the punches.

Made a good carb guess.  Bolused.

His BG was right where it should have been at lunchtime.  I couldn't have done better myself!

Some days I think he'll never learn to take over his diabetes care, but clearly he's getting it and I'm so grateful.

But one thing I didn't worry about?  The cost of diabetes.  I had no idea that this disease would be so expensive.

So what's a D-Mom to do? Try to save as much as money as you can elsewhere.


A Way to Save Money

Several months ago, I discovered a great website that's helped me build a budget, save money and get myself a little better organized. Financially, physically, and around the home .

Best of all? It's just an ordinary website with no fees. Years ago I did the Grocery Game, but there was a monthly charge and I was tired of paying to save money.

The website is called Money Saving Mom and it's truly fantastic. You'll find tips on grocery store sales. Drugstore deals. Every week there are links to several freebies that you can sign up for. There are even tons of great recipes.

Just this week on her website, I discover that the Apple Store has FREE Apple Camp for kids ages 8-12.  They learn to make movies!  Matthew's going to love it!  Many of the classes are filling up, but you still might snag a spot.

So pop over and visit Crystal, from Money Saving Mom.  It'll be worth it!

FYI...I have no connection with her. I just love the website!


How do you save money?


Do you have a favorite website that helps you pinch pennies?  I'd love to hear about it in the comment section.

Vacation Bible School. Swimming lessons. Diabetes Camp.  For the entire month of June, we have only ONE free day.

All the activities are great, but truthfully June is so busy that "fun" isn't how I would describe it.  "Hectic" might be a better word, but "hectic" isn't the kind of summer I long for.

This year, I just want to enjoy time together, so we made a list of fun things to do.  Each week we pick an idea and get busy!

(Those with an asterisk are from Pinterest.  If you click over, most of them are on the Matthew board.)

One of the best things we've done so far is visit a local mosaic shop to get crafty. Look at this great sword that Matthew made!


It was a great way to spend Kevin's birthday and we created some fun memories.

It's not too late to start your own Summer Fun List.  Jot down some thoughts.  Ask your kids for ideas and then be sure to share in the comments. I'd love to hear what you're planning!  And I'll probably add them to my list!

Email ThisBlogThis!Share to TwitterShare to FacebookShare to Pinterest
Labels: Family

How to Chop Onions without Tears

Tuesday Tip of the Day returns.

Don't you hate it when you chop onions and your eyes start to sting?

Storing onions in the refrigerator never worked for me.  But finally, after about 15 years, I figured out a solution!

Chew gum while you chop up that onion.  Your eyes won't burn!


Since I'm writing about onions, I thought you might enjoy a recipe.  For D-Moms with a gram scale, I've included the weights.  Our carb count is listed below.

1.  Cook noodles for 10 minutes.
2.  In skillet, mix together the chicken broth and flour. Slowly add in the remaining ingredients, except for the cheese.
3.  When noodles are ready, put everything into a greased glass pan.
4.  Top with cheese.
5.  Bake at 350 for 5-10 minutes or until cheese is melted.

This recipe makes 8 servings and each serving is about 22 carbs, depending on your particular ingredients.  Enjoy!

A Book Review: The Fiddler

Bethany House Publishers sent me a free copy of The Fiddler by Beverly Lewis, in exchange for my honest review.

This story begins with an accidental meeting.

Amelia DeVries is an acclaimed violinist and also a "secret" country music fiddler.  She gets caught in a storm and meets Michael Hostetler, a young Amish man struggling with the decision to be baptized into the Amish faith or "go fancy."

Both characters are facing the same dilemma.  They want to respect and "obey" their parents, but at the same time, Amelia and Michael have their own dreams that are very different from what their parents expect.

If you've never read Amish fiction, the Home to Hickory Hollow series would be a perfect place to start.   I enjoyed reading about the Amish lifestyle with a contemporary twist.

And since I'm a piano teacher, I loved the music aspect as well.

Book 2, The Bridesmaid, comes out in September.

It's definitely on my wishlist!

I meant to do a school-year wrap up.  Honestly I did!

But life happens and quite frankly...I've been trying to spend less time on the computer. (It's been nice!)

It was, however, a great school year for Matthew!  Another year with fabulous grades and he won the spelling bee again.  He even got to dress up like Leonardo DaVinci.  I need to post a picture!!

In the area of diabetes, he was amazing! You might remember that there's no nurse at his school.

(There's a teacher who's a D-Mom  and she was helping him when needed.What a blessing!)

But this year was "transition year" for Matthew and by the end of the school year, he was handling everything on his own.   (During school hours).

It was a rare day that he hard to call for help.

It was a big accomplishment.

Email ThisBlogThis!Share to TwitterShare to FacebookShare to Pinterest
Labels: Signs of progress

How to Store Strawberries


If you're a strawberry lover like me, then you're going to love this storage tip!

First, get a plastic container or glass bowl that has a lid.  Line the bottom and sides of the container with paper towels.

Toss the unwashed strawberries into the bowl and cover them with additional paper towels.

Make sure the berries are COMPLETELY covered up with the paper towels.  You should not see the strawberries at this point.

Put the lid on the bowl and place the container in the fridge.

Those strawberries will last for AT LEAST a week.