I just wanted to let you know I'm taking a break from blogging. I need some time to get my life back in balance.

Today I only read one blog and it was REYNA's BLOG-----it was just the confirmation I needed. A little "me time" really has to be a priority.

I'm hoping to be back around mid-September. Please don't forget about me! : )

THE GOOD NEWS: Matthew is doing much better. We're still battling ketones a bit, but he's definitely over the hump. Thank you for your prayers.

THE BAD NEWS: I am falling apart.

This morning, the doorbell rang and to my horror I realized I had forgotten to cancel my piano students. So.....I had to answer the door, looking TOTALLY skanky......exhausted from taking care of Matthew all night. I was still in my PJ's.....hair a mess.....didn't have my contacts in.....I'm quite sure I scared the daylights out of my piano student.

Fortunately I didn't burst into tears until I explained the situation and told them I would reschedule.

I was so completely embarrassed to have forgotten about lessons. That has never happened before and I'm still mortified. And overwhelmed....I'm just so overwhelmed......and I can't seem to pick myself up.
Posted by Tracy1918 at 11:49 AM 3 comments:

Well, it was a rough night. Matthew's had moderate ketones again before bed.

I called the CDE and she wanted me to give him fluids every 2 hours. She didn't want all of it to be water, though. Some needed to be juice so we could get some insulin in him. (His sugar has stayed below 150 so we can't give the sick-day dose.)

At 3am, I woke him for juice. He did great! Drank every drop, so I gave the insulin and we fell asleep.

One hour later and he threw it all up. BUT he had the insulin in him and he was only 115!!!

I checked him every 20 minutes and we got through. It was a long night.

Then he woke up this morning with LARGE ketones. Terrific. Now what?

I'm got a little food in him, then gave the insulin and now I'm praying it all stays down.

Wow. I never realized how easy life was before diabetes. I took a lot for granted.
Posted by Tracy1918 at 8:33 AM 3 comments:

Matthew started getting sick yesterday and sadly, he has all the fun stuff: vomiting overnight....fever.....now diarrhea.

He had moderate ketones this morning, but his BS was only 145. He felt really lousy. I think it was all the ketones making him feel so bad. I called his CDE and she helped me come up with a plan. Basically just eating and drinking.....assuming he could keep it all down.

I had no idea how tough it would be to figure out sick-day stuff. I mean.....with shots....I can't give him insulin for 1 or 2 crackers. But he has to eat and he has to have insulin. Hmmmm...

I finally convinced him to try a slice of toast and some gatorade, but I didn't give him the insulin until I was sure he'd keep it down. Fortunately, he did.

Of course, then the diarrhea started and he went low. I guess it'll be this way until everything actually stays in him??

Good news though....ketones are now negative (we'll keep checking) and he's a happy camper parked in front of the TV.

1. The eye appointment went GREAT! Well....except for the dilation. You would have thought they were pulling out his eyeballs. The kid did not do well with this. Although, considering all he's been through the past 5 months, you can hardly blame him.

2. Second....he got invited to a birthday party for next weekend. A SLEEPOVER. The nerve of some people. LOL. At first I thought there was no way I would be willing to let Matthew go....but I don't want him to miss out on ANYTHING. So.....if you have sleepover tips, I welcome them.

I'm going to call the mom this weekend and find out the full plan for food and such. At this point, I think I'll lower his Lantus and let him run a little higher. I plan to call the nurse next week and get some help. By the way, Matthew is so totally excited that we're going to let him go.....It makes it all worth it. Oh! And if the mom offers to let me camp out in a spare bedroom, I'm going to take her up on it!

3. And finally, 11 moms have signed up for the Prayer Partner list. I'm sorry I haven't gotten the names out yet. I still need info from traveller---so please get that to me. Also.....I need one more mom to sign up so everyone gets a partner. If you're on the fence, just jump on over. This will be a small time committment and you'll get to know another D-Mom better.

That's it. Have a GREAT Friday!

Just wanted to let you all know I'm doing better. Thank you for letting me know that my rollercoaster emotions are normal and I'm not a total weirdo. : )

I just realized that Matthew was diagnosed 5 months ago today. Wow. It's been a crazy 5 months. But you know what? It's not been bad. Though I am amazed at how much I've learned during this short time. UNBELIEVABLE.

We're off to take Matthew to a pediatric opthamologist today for his baseline eye exam. When I made the appointment, they asked for all our insurance information. I told them we don't have eye insurance. But then the woman said because this is for his diabetes, that it falls under our medical insurance. THAT IS TOTALLY COOL!

I love those little blessings.

Thank you all for your sweet comments. You are all so encouraging....and it really does help!

I am in the funk of funks. It stinks.

(Ironically, Matthew's BS is doing great. Those late-night-highs are getting better and he's really doing great.)

I think I'm worrying over all the "what ifs" in my life:

All these "what ifs" are playing around in my head and IT'S DRIVING ME CRAZY!

Except pray. Trust God. Try not to get mad at Him. (I was really mad at God yesterday. I know....I'm so dumb sometimes...) Take it one day at a time.

That's what I'm not doing. I keep forgetting to live life one day at a time.

Have I ever put a picture of our adorable dog on here? I can't remember....so I'll pop one on just in case. This is Twister. 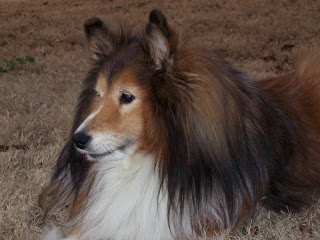 I'm tired. Not sleepy. Just tired of everything right now.

Sometimes it's all overwhelming.